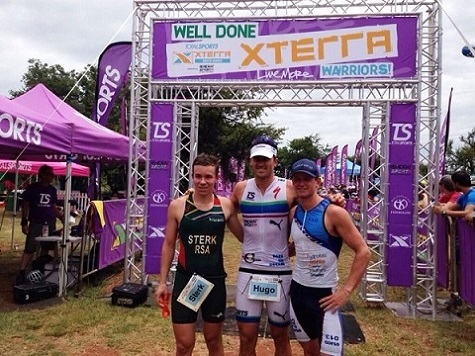 The 2014 Xterra Buffelspoort (like most around the world) was extremely tough, fun and a true test of every participant’s character. With the likes of Conrad Stoltz, Dan Hugo, Bradley Weiss (the 2012 u/23 Tri Cross World Champion) and many other top athletes the men’s line up for this event made the race an exciting prospect. In some way I would have loved to be a spectator on the day and watch the top men battle it out in the Magalies Mountains. But that would have been the easy option…I instead decided to take on the challenge set to me 15 months ago and see for myself how the race would unfold upfront. This meant I needed to prepare like I have never done before in my life.
To prepare for an Xterra event you have to:
Acquire the best possible equipment for open water swimming, mountain biking and trail running. Be aware this comes at a huge financial cost if you don’t get sponsored in full.
Stick to a training structure and plan that you believe in and avoid running injuries at all cost!
Learn from the best in the business with regards to swimming, mountain biking and trail running.
Create a support team of individuals and coaches good enough to take you to world champs and win. All of them need to understand you and be very honest with even if you don’t like it.

The swim start went ok for me. I think Bryn Freeman gave me a good elbow in the face about 50 m into the swim leg of 1500 m. I know Bryn from many other races and lucky for that reason I forgave him within a split second. But I can promise you I made sure I kept my distance from him thereafter…I managed to turn at the first buoy with all the favorites for the race. From there on I was swimming at a strong effort but in control of my excursion in the water with the leading group.

Dan Hugo showing all of us his swimming pedigree managed to open up a 50 second gap to the leading group of men as he excited the water. Conrad Stoltz, Bradley Weiss, Brad Edwards and I came sprinting out of the water with a frantic cheer from the crowed. I knew I had to stay as long as possible with Conrad. He was my ticket to have a successful race. Something like; “stick with me and I will make you famous scenario”…for those who don’t know who Conrad Stoltz is: He is a 7 x time Off Road Triathlon World Champion and probably the most successful Xterra athlete ever in the world.

A few hundred meters into the bike leg of 28 km mountain biking (don’t let the distances fool you). I was exactly where I needed to be, tailing Conrad. We started with a decent on a slippery hard surface gravel road. We both went to fast into the second major turn in the route. Conrad saved himself from falling, unfortunately lady luck weren’t smiling for me at that moment in time.

I fell and I came down hard onto mother earth. Funny my first reaction was to make sure I get my bike and body out of the way for Bradley. Otherwise I might just be in another bike crash with him trying to serve out of my way. I got back on the bike and decided to stick with Bradley for a while until I got my composure back to race again. Bradley who is a supper talented athlete pulled me all the way to Mountain Sanctuary Park. We managed to catch and pass Theo Blignaut in the same process. Bradley and I started the long rocky accent in Mountain Sanctuary together and by the end of the climb he managed to open a 10 second lead to me. To be honest I wasn’t worried. My form was really great and I knew where my limit was concerning the effort I could exert in a race like this. There was still a lot of cycling left and a monster 13 km trail run lying in wait for us…

Bradley being just out of sight unfortunately took a wrong turn at Mountain Sanctuary Campsite and this automatically placed me in 3rd position overall. I then passed Conrad Stoltz (he had to stop to fix a puncture) at the start of the Mountain Sanctuary single track and this meant that within a few minutes I moved up into second position.

In the meanwhile Dan managed to open up a 2:30 min gap onto me. I raced at a strong effort from this point on for the remainder of the bike leg. This is something I will have to learn to change in the future. I still need to develop that pure speed, power and aggression on the bike. If the bike leg were to be double the distance we raced…then I think my pace and effort would have been perfect. Going to Harry’s single track then up to Ilhanti and then later on near the final decent of the bike course I was quite happy to be placed second overall. I didn’t really wonder too much about Dan’s lead over me and what was going on behind me. All I was focused to do at that point in time was to finish 2nd and if Dan Hugo for some reason pick up a bike problem or later on the run get some trouble I might manage to win the race. This does not mean that I did not try to beat Dan. It just meant that I was very honest with myself and realized that Dan was having a fantastic race. Thus I was just making sure I get myself back to the transition area in 2nd position. I came into transition trailing Dan by 3:30 or 4 minutes…not exactly sure.

The MONSTER tail run – a 13 km rocky and rugged bushveld terrain…But it must be pointed out that the trail run goes through spectacular eco systems and scenery. It is a must trail run for any trail running enthusiast. You run down a dam wall (1. 5 km mark), up a ravine forest in a dry stream (2 km mark), up a rocky valley to a pristine bushveld plateau (7 km mark). Then there after the real fun starts you run down an extremely steep gravel road which is littered with coconut size loos rocks (9 km mark). It is so steep that you cannot control your speed once you start running. Every time your feet hits the ground it is a 50/50 chance you will slip or worse break an ankle…But again I have to emphasize the run leg is fun and a must, a true challenge!

I managed to have a solid run and keep my second position overall. Dan Hugo was phenomenal on the day. He is truly world class and such a calm headed and collective individual. I can still learn a lot from him in the manner he conducts his races. He was the best athlete on the day and deserved every credit he received for winning. It would have been a cracker of a race if Conrad did not pick up his mechanical problems (two punctures). He was really strong on the day and I know he wanted to win the race badly. Bradley Weiss and Theo Blignaut had to battle it out for the 3rd overall position on the run leg. Both of them are fantastic runners and athletes. Brad managed to putt in the second fastest run spilt on the day and that brought him home for 3rd place overall.

The Xterra proved to be a true world class show case. With fantastic race organizer involved and one of the biggest Xterra events in the world in terms of entries for the full and lite events.
Thank you to my fantastic support team. I am surrounded by the best team in the world. They are all down to earth individuals and as normal as you and me. But they are all specialists in their field of expertise: (I must still up my game to justify this level of support)